So, over the past week or so, I've finally managed to get out and do some biking. Which was great. Honestly, I was actually in a pretty big funk this past weekend (mainly exacerbated by a killer hangover from Friday), and what really pulled me out of it was getting on my bike.

It really is incredibly freeing to be able to just get on your bike, and go. Regardless of how you're feeling; even if you're jittery enough that just getting outside is a bit daunting, that just evaporates for maybee twenty minutes after I get in the saddle, and head out.

So, for my first route, on Saturday, I hadn't expected to go as far as I did; the underlying malaise I was feeling really was discoraging me from getting too ambitious, and so, when I started, I only was thinking about heading west; not really any particular destination, just to go out and have as good a time as I could, for as long as I was comfortable. In the end, after my discomfort had vanished, I managed to do my "warm-up" route from my previous post (with a few modifications). 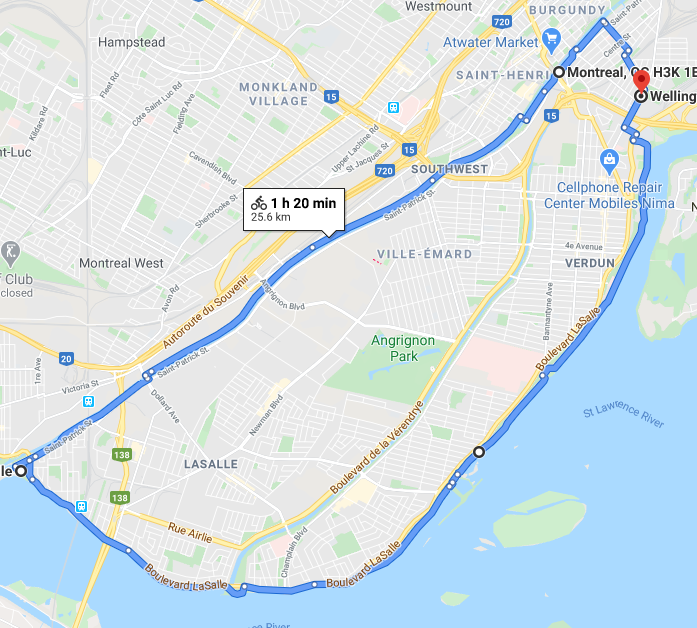 So, I took this route, and then decided to follow it mostly to a T, though on the way there, I didn't take the bike path, I took Lasalle Boulevard. Once I hit Réné Levesque park, I veered right, and then headed back along the canal, but quickly decided to simply just take a meandering way through Lasalle, rather than actually go on the bike path for social distancing reasons. It was a nice little ride; I had a really good time. All in all, was probably about 25 kilometers or so.

Today (Tuesday), I took another stab at it, and went a little further afield; up north into St-Pierre, and through Montreal West (where I grew up), and visited a few people for a quick chat. One of the main reasons I did this, apart from wanting a ride, and some nostalgia, was to test my new cleats; one of the guys who encouraged me to get them told me they were great for going up hills. On the way up to Montreal West from St-Pierre, there is indeed a decent sized hill, called Devil's Hill. 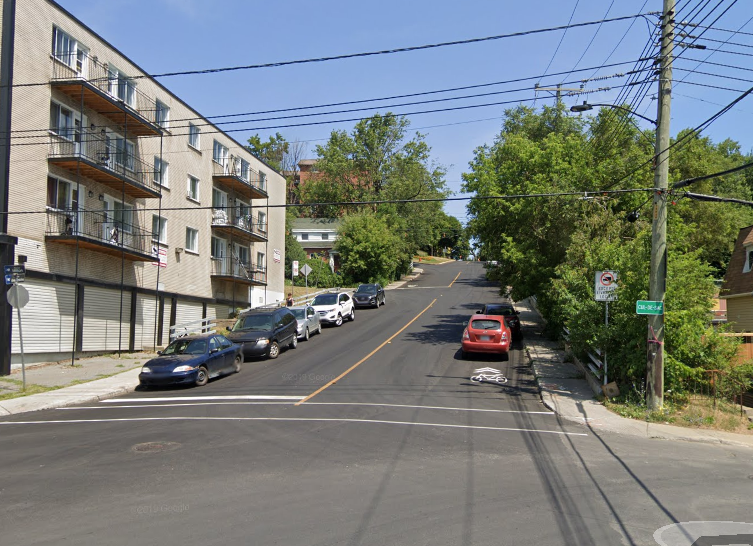 It doesn't look as steep in that photo as it is, trust me.

Also, on my way back, I decided to go through Westmount, over a smaller hump of the mountain, up Victoria street, which has a decent grade as well. All in all, the route looked like this: 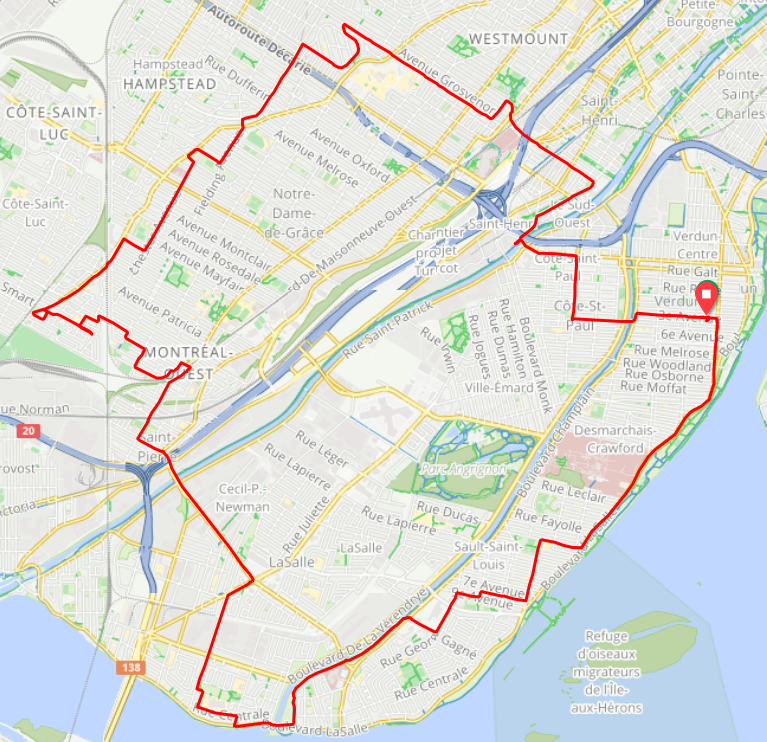 So in conclusion, while I can't really distinguish between the new bike, and the clip-on pedals, let me tell you, it is much easier than it was with my old steel bike and regular running shoes. It was also easier to find a nice equilibrium in terms of my foot position. I've been having a bit of pain in ankle, and I'm pretty sure it's because I screwed something up last summer; my bike wasn't properly adjusted, and so I overextended my ankle repeatedly, and it's something that's persisted through winter, which worries me slightly. However, the cleats really allow me to just pick whatever position I want as being my default "resting position", and I made a conscious effort to have it not be my left leg fully extended, and that seems to have helped greatly to reduce the strain on my left ankle. I'm considering seeing a physiotherapist about this, but for now, I'm just keeping an eye on it.

And so even though the ride was modified pretty heavily by not wanting to stick to bikepaths (where no one keep distance), I still had a great time. This ride gives me a lot of hope about biking this summer, that even if the COVID-19 measures continue, I'll still be able to have biking as a relatively risk-free outlet. It was surprisingly doable to keep a good distance away from everyone; the only times things got dicey was in Montreal West (where there were kids everywhere), and on Queen Mary approaching Snowdon, which was surprisingly busy. But even then, I still managed to get through without actually getting within ~2m of anyone.

The only question mark for me at this point, is biking with other poeple. I'm not sure how biking in a group is going to work; but it'll be interesting to see if we can make it work. I think you'll probably have to be a bit further than 2m back from someone who's biking with you, but it should be eminently doable to just space out a bit, and regroup every so often. I look forward to trying!